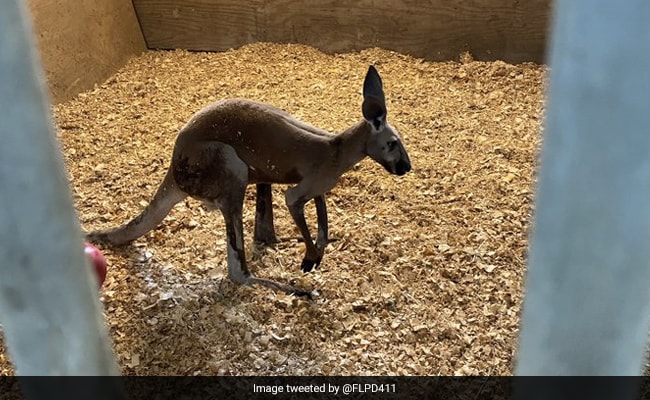 The two-year-old kangaroo was safely transported to stables used for police horses.

An unexpected appearance by a kangaroo led police in Florida on a chase that ended with the animal in the back of their patrol car. Fort Lauderdale police received a call about a kangaroo on the loose in the city on Thursday morning, reports USA Today.

Sergeant DeAnna Greenlaw said that cops reached the area only to find the kangaroo, a species endemic to Australia, hopping around the US city. Not trained in the handling of exotic species, cops nevertheless managed to guide the kangaroo into the back of a police car using a leash used for stray dogs.

“Officers in District 2 worked together to safely capture this kangaroo and turn it over to the South Florida Wildlife Center,” Fort Lauderdale Police wrote on Twitter, sharing a picture of the marsupial.

Who caught a glimpse of #FLPD‘s newest mate hoping through our community this morning?

Officers in District 2 worked together to safely capture this kangaroo and turn it over to the South Florida Wildlife Center. pic.twitter.com/y4rZ5QQApS

The kangaroo is now in the custody of the Florida Fish and Wildlife Conservation Commission, who will conduct an investigation into the case as keeping an exotic animal is not permitted in Fort Lauderdale. Meanwhile, the police department delighted their followers by also sharing a video of the kangaroo playing in an enclosure with grass to eat and a ball to play with.

The @MyFWC will be taking care of the kangaroo rescued from wandering the streets of the city this morning. Fort Lauderdale code does not allow exotic animals like this within the city limits. @FTLCityNews@wsvn@CBSMiami@WPLGLocal10@nbc6@AC360@ABCpic.twitter.com/n06Cg58xr6

The South Florida Sun Sentinel reported that the kangaroo’s name is Jack and it is two-years-old. Jack belongs to Anthony Macias, 24, who said the animal probably escaped when he did not shut the gate properly.

“I was taking out the recycle bin and I didn’t shut the gate all the way,” Mr Macias said. “I guess he just punched his way through.”

“He’s so nice,” the kangaroo’s owner added. “He doesn’t mean anyone any harm.”