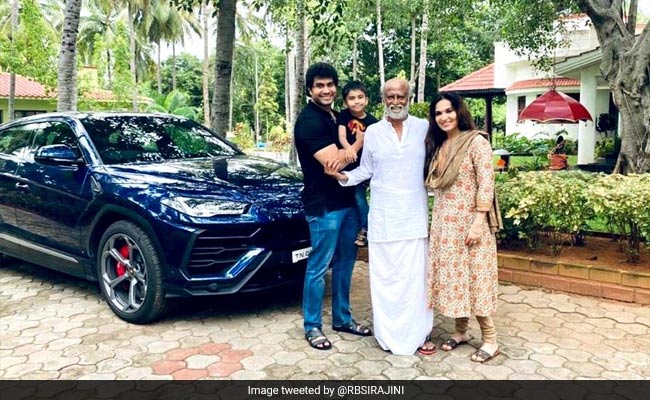 Superstar-politician Rajinikanth has sent the Internet into overdrive with a picture that shows him wearing a face mask while driving a luxury car. Rajinikanth, 69, was spotted driving a Lamborghini in a photo that has taken social media by storm and set the hashtag #LionInLamborghini trending on Twitter.

The actor was photographed wearing a protective face mask as per government regulations amid the coronavirus pandemic. He also put on the seat belt while going out for a drive in the luxury car – a fact that was noticed and applauded by many on social media.

The picture has earned Rajinikanth a lot of praise on the microblogging platform, which has been flooded with #LionInLamborghini tweets shared by fans.

“He practices what he preaches. Wearing mask inside his own car as well. Leader for a reason,” wrote one Twitter user while sharing the picture, while another remarked: “This is the perfect example of how to protect ourselves when we go outside during this #Corona period. Wear a mask and when we drive a car should wear a seat belt without fail and drive safely.”

A fan account dedicated to Rajinikanth revealed that the actor was filmed driving a Lamborghini Urus model. ” The #Lamborghini #Urus model car seen in the picture is the car which Thalaivar drove,” the account wrote on Twitter, sharing a picture that shows him with daughter Soundarya Rajinikanth, with the blue car in the background.

Thalaivar #Superstar@rajinikanth with his daughter @soundaryaarajni family. The #Lamborghini#Urus model car seen in the picture is the car which Thalaivar drove (The pic we saw yesterday). Very happy to see #Thalaivar smiling and happy. #ThalaivarForLife
#Rajinikanth#RBSIpic.twitter.com/mCtMSSmomH

According to The Hindu, Rajinikanth had revealed during the audio launch of his film Darbar late last year that in the Seventies, when he was yet to achieve the stardom he enjoys today, a producer humiliated him by asking him to leave AVM Studios on foot after a disagreement.

“But… that day I decided that if, one day, I do not come down this road to AVM Studios, sitting inside a foreign car with one leg over the other… then I’m not Rajinikanth!” said the superstar.

Two and a half years after that, the actor purchased an Italian-made Fiat car owned by the proprietors of AVM Studios.

In a video message shared on Tamil New Year in April, Rajinikanth had urged Tamils in every nation to follow restrictions imposed by governments to protect themselves from the highly contagious coronavirus and assured them that “this too shall pass”.