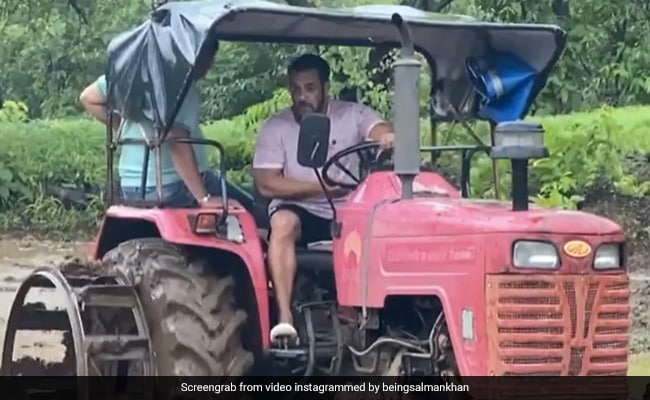 Salman Khan in a still from the clip. (Image courtesy: beingsalmankhan)

Salman Khan, who was recently mocked on social media for posting a picture of himself sitting in a field and all covered with mud, shared a new clip from his “farming” diaries on Monday, which again didn’t go down well with the Internet. In his latest post, the actor can be seen ploughing a field with the help of tractor on a rainy day, followed by some shots of the actor walking in the mud. However, what Salman Khan shared as a glimpse of his day in a field was soon labelled as a “show off” by the social media users. Within no time, Salman Khan’s post was filled with comments such as: “Ye sab dikhawa hai” and “dikhawa acha kr lete ho.” One of the users wrote: “That’s not farming, it’s simply playing in the mud” while another commented: “Instead of showing off, you can post about actual issues that farmers face.”

Here’s the post, sharing which Salman Khan, who is currently living in his Panvel farmhouse, wrote: “Farming.”

A couple of days ago, Salman Khan was brutally trolled by netizens for posting a picture of himself covered with mud. Salman Khan shared the picture as a tribute to farmers but the Internet called the actor’s move a photo-op. Many social media users pointed out that Salman’s whole body can be seen covered with mud but his hands look clean in the picture, concluding that someone else applied mud on his body. One user wrote: “Someone else has applied mud on him” while another commented: “Kaunsa farmer khet pe baith ke aise photo shoot karta hai?”

Salman Khan, earlier this month, shared a picture from himself from a field and captioned it like this: “Daane daane pe likha hota hai khane wale Ka naam… Jai jawan! Jai kissan.”