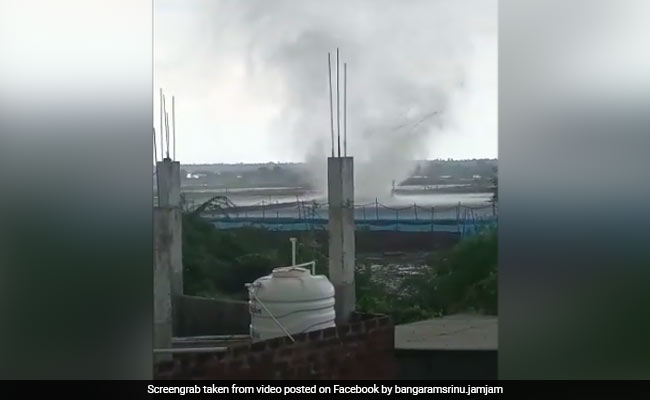 A small tornado was spotted in Puducherry’s Yanam and areas along the Godavari river this afternoon as heavy rain and strong wind ripped through the region. Videos shared widely on social media show water rising towards the clouds in a spiral at the eye of the tornado as people watched in astonishment, capturing the spectacle on their phones.

Makeshift structures and steel roofs in the area collapsed because of the heavy rain and strong wind, the videos show.

Speaking to NDTV, Shivraj Meena, a senior officer at this Puducherry enclave said, “A few huts suffered minor damages when the tornado hit around 1:05 PM. There are no reports of casualties so far.”

According to the locals, the tornado struck some shrimp farms along the Godavari.

Birava Moorthy, a local resident who witnessed the tornado, said, “We’ve never seen anything like this. The water swiftly spiralled towards the sky”.

In India, tornadoes are rare and the sub-continent is prone to devastating cyclones.

“This is certainly a tornado with less intensity. This is very rare. We’ve seen a tornado at Ennorr in Chennai seven years ago and a water sprout at Uthandi along the East Coast in November 2017”, Pradeep John, renowned weather blogger who runs the popular page “Tamil Nadu Weatherman” told NDTV.