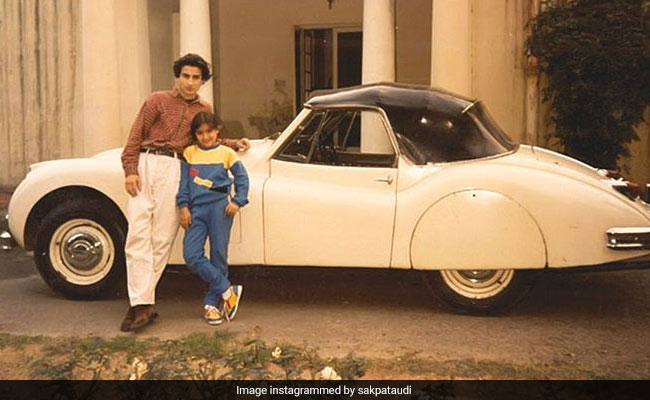 On Raksha Bandhan, Soha Ali Khan flipped through the pages of her family album and dug out a priceless throwback of brother Saif Ali Khan as a very young man and herself as a little girl – Soha (now 41) and Saif (now 49) share an age difference of eight years. In her Rakhi wish for Saif, Soha described him as the “coolest brother” and also made a confession: “There’s no denying you are the coolest brother I know. And there’s no denying I don’t know the first thing about being cool!” Well, there’s also no denying that one look at the photo posted by Soha will lead you to think that it is actually one of Saif Ali Khan’s son Ibrahim and daughter Sara. Soha Ali Khan’s post sent her Instafam into a tizzy over Ibrahim’s striking resemblance to Saif from what appears to be his late teens and Sara’s resemblance to little Soha.

This blast from the past will indeed make you do a double take:

Meanwhile, Soha Ali Khan, on her daughter Inaaya’s behalf, also shared an adorable Rakhi post for Saif Ali Khan and Kareena Kapoor’s son Taimur: “On the ball and in my corner,” she wrote. Re-sharing Soha’s post, Kareena wrote: “Inni wondering how Tim got that pout from.” LOL.

On Raksha Bandhan, Inaaya tied Rakhi to one of her favourite people, as revealed by Soha in this post: “When I told Inaaya about the bonds of Rakhi and the promise of protection she said ‘I have to tie a Rakhi to Shobha didi because she protects and takes care of me every day’.”